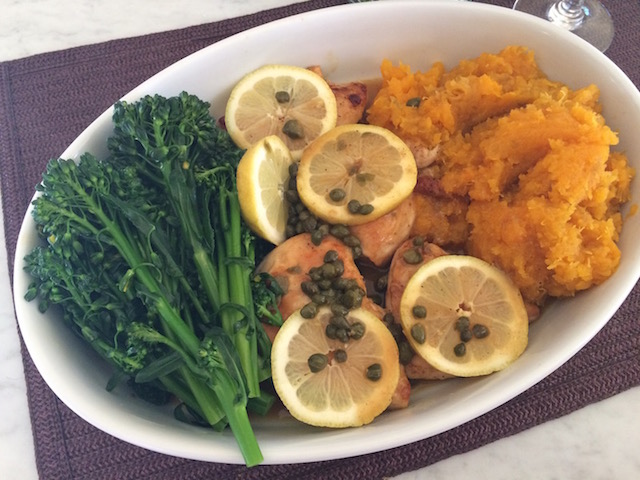 When I wrote in May about foods that are in my regular line up and that are easy and seasonless, several of my subscribers replied and asked for the Chicken Piccata recipe. And so I quantified what I really do (because of course I’ve been kind of winging it) and…Voila.  Thanks for asking!

PS – this recipe is for chicken with fettuccine … but I’ve also served it with quinoa or mashed yams or rice or, or, or…

In a pie plate, combine flour with salt, pepper and lemon zest.

Heat oil and butter together in a large sauté pan over medium high heat.   Coat both sides of the chicken breast fillets in the flour mixture, shaking off any excess flour and add them individually into the hot pan with butter/oil. Cook until well browned on each side.

Begin boiling water and making the fettuccine noodles so they are done a few minutes before the chicken is done.

Use tongs and remove cooked chicken from the pan to a rimmed plate.

Take the pan off the burner and slowly add the chicken stock, capers, and lemon juice to the pan.  Stir in any bits from the bottom of the pan.

Use the tongs and put the chicken back in the pan, letting the liquid boil and then simmer until the liquid has reduced, basting often with the juice.

Strain the fettuccine and shake off all the water.  Divide among four plates.

Top each plate with the chicken filet and the pour the juices on top of the whole shebang. Garnish with a wedge of lemon and serve with either a green salad or broccolini.

PS: This recipe works if you substitute lime for the lemon..and fish filets that are thinnish (think Petrale Sole) can be made the same way, but I use half the broth (veggie broth in this case).

This entry was posted in Pasta, Poultry and tagged Chicken Piccata, fettuccine. Bookmark the permalink.