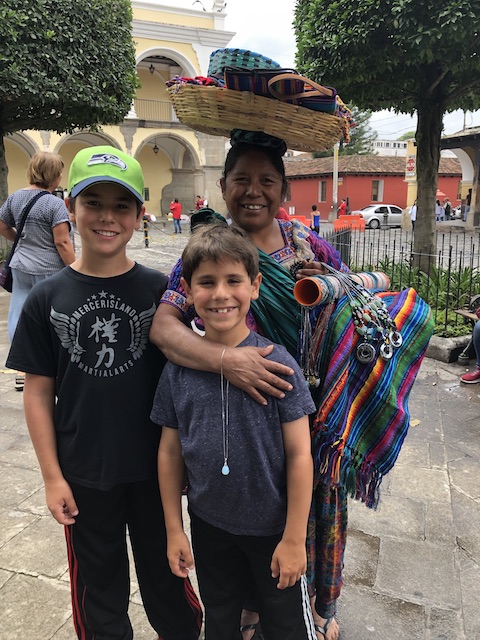 Juana with my grandsons Isaiah and Asher

My husband and I have been traveling to Guatemala every other month for a year. This magical place is so different from what I pictured in my mind or what I read about the country in numerous news publications.  Our base camp is mostly in beautiful Antigua, which is the “jewel” of Guatemala – a UNESCO World Heritage Site with so many great inexpensive restaurants, yoga studios, and tourism. Clearly, Guatemala is more populated, and less modern than, say, Mexico or Belize but I really love the amount of culture everywhere and the sheer physical beauty in many spots.  Antigua is not representative of Guatemala.  Of course, there are flat, arid areas that are like the wild west too and a lot of abject poverty.!

My favorite part of travel always centers on getting to know the natives.  We have met some very nice ex-pat Americans, Europeans, and Canadians here as well, but I seem to gravitate to the Guatemalans I have met at the daily Mercado, in the park, and on the streets.  Life for most of them is really really difficult, particularly because so many are not able to read or write.

Every day there are a few hundred Mayan women (and children) milling around the central park, the main tourist street, and a few touristy spots. Most are selling knick-knacks, many of which are made in China.  Most venders sell identical merchandise – scarves, table runners, plastic toys, LED lights, food for pigeons. Day after day, year after year the women come to Antigua to sell their goods to tourists.

So it was that I got to know Juana, who lives a bus ride away from Antigua.  She is in her mid 40’s and has three sons and a husband. She is unable to do any other type of work since she does not read or write.  Her Spanish, since her main language is a Mayan tongue, is slow and easy for me to understand. She’s a smart woman, this much I know.

Just so you are aware, a lot of really poor Guatemalans hustle the foreigners and ask for money for things such as a sick Grandmother, food, or rent.  I don’t give money randomly for these requests because a lot of the stories are fabricated and I believe in helping someone help themselves. That said, I have been known to buy a nice dinner for an elderly Mayan Grandmother who was begging outside of a restaurant.

Juana had a story about her husband Miguel needing surgery so that he could work again.  Skeptical me, I had my husband go with the family to a public, church-sponsored hospital appointment and sure enough, he badly needed an operation.  We told Juana and Miguel that we would pay for the surgery and all the tests and medications before and after which amounted to less than 400 dollars.  The surgery was performed in September and both were so grateful to us for our help. This has enabled Miguel to resume his work tilling the coffee fields.

Juana continued to come to the park to sell her trinkets and we saw that, during the low season when there were few tourists, it was pretty futile  We asked her what else she could do to support her family, She explained that she is unable to find work even as a maid. But then she exclaimed, “I could make and sell tortillas!”

In two days I found myself in a car en route to a nearby town to purchase a “comal” or special gas-driven griddle specifically constructed for tortilla making.  Juana bargained hard and so did I but she had a lot better Spanish and credibility. I ended up paying $120 US dollars for this huge stove. Next, we loaded the griddle in the Uber and drove to her village of about 300 families.

The narrow walkway leading up to her “house” wouldn’t accommodate a car, so my sturdy 70-plus-year-old husband and the 38-year-old Uber driver Antonio (now a friend of ours) carried the stove about six blocks uphill to her residence.  We opened the door to the corrugated metal outside and I must tell you I have rarely seen anything like this Chickens and roosters running around, no plumbing, no electricity, no running water, just a smallish room for a family of five.  To earn more money, they even rent a cot to someone who sleeps by the kitchen. Wayne set up a propane tank to the stove, we bought her oil and cornmeal and voila, she was in business.

Her youngest son made a sign for the tortillas which she now sells three times a day.  I spoke with Juana about a week later and she was so thrilled with her new business and was earning about 70 quetzales per day, or around $10.   Not bad in a country where the average wage per family is around $1.70 per day! She no longer makes the daily trek to Antigua to sell trinkets. 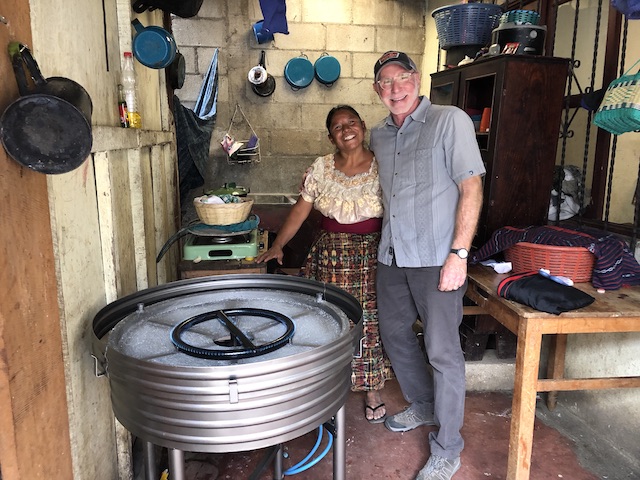 I am humbled by Juana and her family. Though I know she and Miguel and their children are thankful for the things Wayne and I have done for them – I believe I am the one who is most grateful.  Just knowing that we’ve been able to make a difference in their lives – and perhaps even their children’s lives for generations to come – makes me verklempt. Best of all – Juana and her family have become our family. And I’ve got to add – she makes the best darn tortillas I’ve ever tasted!

This entry was posted in Central America, Travel and tagged Juana. Bookmark the permalink.