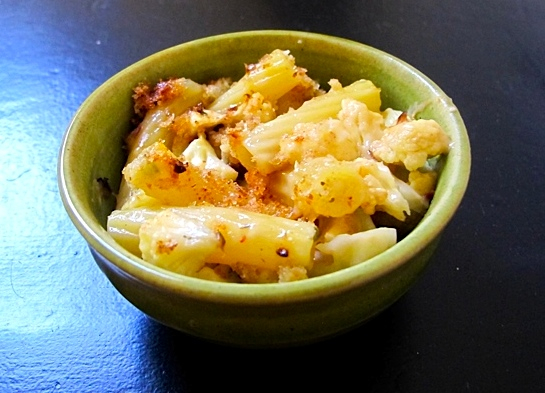 There is a back story, of course, to this recipe which I spun off from one published recently in the New York Times.  On a rainy Sunday, I found the story about Rigatoni with Cauliflower, and read the recipe; it sounded so good to me, a true cauliflower lover who had a lot of fresh sage to use at the end of the season, so I saved it to my “to try” file.  I do this a lot.  Then Sister Sue asked me for a recommendation for a vegetarian main dish for company last week, so I happily sent on the recipe. She reported back that not only did she make it, but she loved it – as did her company.

“Did you change anything,” I asked?  She indignantly answered me via email  … and I quote “Regarding changes, why make any if it was good?  OH wait, I forgot who was asking (ha ha ha).  I think I may have had more cauliflower which I preferred (same dif as reducing pasta of course, but it makes more quantity overall which I also preferred), but I had to caramelize it in 3 separate batches to get it nicely browned.  I suppose I could have used a larger skillet.  The fontina is a must, you could use any hard cheese and it won’t make a difference.”

Uh huh. She knows me too well… It’s rare that I make anything the way it is written, even the first time through.  This was no exception.  In spite of her admonishment, I used less pasta, subbed whole wheat rigatoni, added more cauliflower, a bit more cheese…more olive oil…and I’m happy with my result.  The dish isn’t a stick together saucy pasta, but rather a delicately coated but interestingly flavored dish.  It does take a lot of salt, even with the cheese.

I didn’t garnish this with parsley as suggested because that seemed too mundane.  I just let it be whitish brownish food, but I served it with large halved oven roasted carrots stirred together with sauteed dino kale and fresh end-of-the-season cherry tomatoes.  The plate was colorful and the sweet tomatoes and carrots balanced out the saltiness of the dish.  It was light but filling and left me enough room to have a scoop of coconut gelato with hot fudge for dessert.

I do love that you can prep and put this dish together several hours before serving …and it makes a lot–enough for 6-10 big eaters as long as you have multiple side dishes as I did.   The seasonings for the cauliflower were different and assertive with theI added sage, capers and red pepper flakes for some extra zip!

Bring a large pot of water to a boil; add one tablespoon of table salt and stir in rigatoni  Stir so it doesn’t stick to the bottom and cook without covering about two minutes less than package directions so it is still al dente.  Drain and rinse with cold water, drain well again so no water remains and set aside.

Cut cauliflower off the hard core and cut away the stems.  Chop the remaining flowerettes into ½ inch pieces.

Put two tablespoons (half of what you will use in total) of the olive oil in a wide 12-14 inch skillet over high heat. Add half of the cauliflower pieces, along with any crumbly morsels, in one layer. Watch as the cauliflower caramelizes for about two minutes, then turn the pieces over and continue to brown them another two minutes.  It should be pretty soft and yield easily to a knife.

Scrape these into a large mixing bowl and repeat the directions with the second half of the olive oil and cauliflower.  Put this into the bowl with the first batch.

Next add the cooked cauliflower mixture and  grated fontina, mozzarella or cheddar cheese and stir gently to combine evenly.

Transfer mixture to a lightly oiled baking dish. Top with parmesan cheese, then with bread crumbs and drizzle with about one and a half tablespoon olive oil. (Dish may be completed to this point up to several hours in advance and kept at room temperature, covered. Or it can be refrigerated overnight but bring to room temperature before baking.)

Bake, uncovered, for 25 to 30 minutes, until top is crisp and golden.  Let it rest a few minutes before serving.

Another note: I always always grate my own cheese.  Much, much better flavors and textures!

This entry was posted in Pasta and tagged Cauliflower, Rigatoni. Bookmark the permalink.