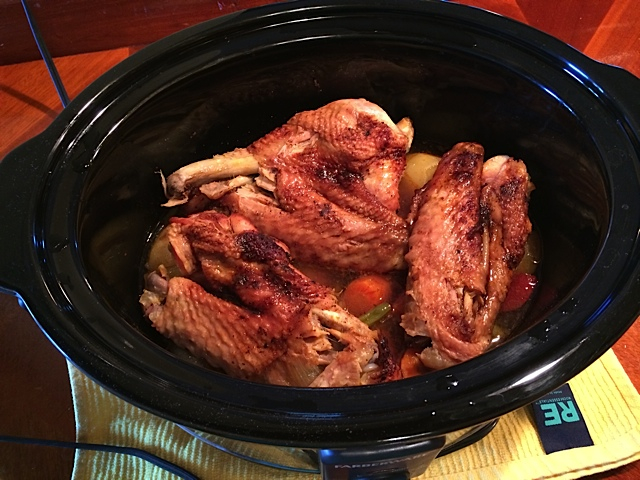 A Pot of Wings!

Three years ago, I posted a roasted turkey wing recipe that baked in the oven. Fast forward to November 2014… While in Belize, I spotted beautiful, meaty turkey wings and suddenly wanted them for dinner.  The thought of turning on the oven in 80-plus degree weather was a non-starter, so I broke out my large crock pot. By the way, I don’t own a crock pot in Seattle – just in Belize.

Like magic, I’ve quickly rewritten an easier version of my original recipe for those of you who have a crock pot on hand and want a simple, filling dinner.  For the crock pot I use less liquid, a lot more vegetables and after blasting the the wings in a disposable pan for 45 minutes, I plop the browned wings on top of the veggies and liquid.  Turn the crock pot to “high” for three hours or cook on low for five or more hours or until the meat is falling-of-the-bone tender.  We called this Turkey Wing Stew because I included so many vegetables. 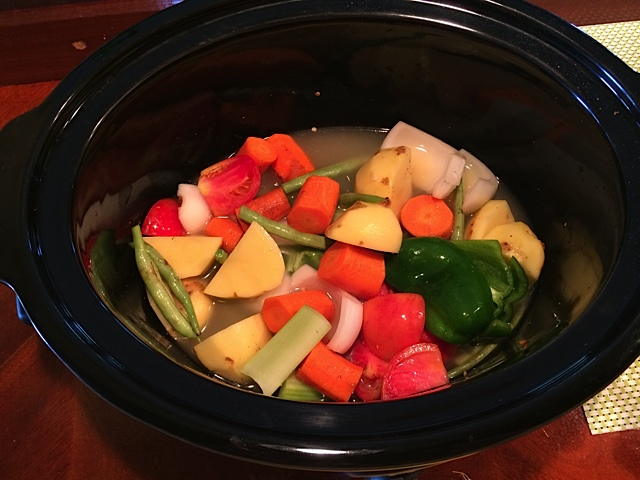 Veggies in the Crock Pot

Ingredients for the spice rub*:

*Note – this is all I had on hand in Belize. You can also use the spice rub I created for the other turkey wing recipe.

Mix the above and store in a sealed container at room temperature. This should keep for at least six months.

Ingredients for the turkey wings:

Preheat the oven to 450 degrees with the rack in the lower-middle part of the oven.

Dry the turkey wings well and rub the skin all over with the olive oil.  Press the spice rub into the skin of the wings.  Place the wings onto a parchment or foil lined roasting pan (I used a large disposable one) and let them roast in the oven for 45 minutes.

Once 45 minutes are up, it is time to transfer the wings from the pan to the crockpot.  I don’t stir the veggies around but leave them on the bottom.  Also, if there are any accumulated juices pour them over the wings as well.  Leave the crock pot on high for 2-3 hours or turn to low for 5-6 hours or until the meat is fall-off-the-bone tender and the carrots are soft enough to bite.  I don’t turn the wings over.  When everything is done, baste the wings with the juice.

I serve this on top of toasted cooked quinoa or brown rice so that it is like a stew.

If you own a crock pot, and many of you do, try this during the cold weather months.  Let me know how you like it! And since you lined the disposable roasting pan with foil or parchment, rinse it out and reuse it several times!

This entry was posted in Poultry and tagged Crock Pot, Turkey Wings. Bookmark the permalink.